If I make one mistake more often than any other as a preacher, it is assuming more than I should about my congregation.

And having begun on those shaky assumptions, I begin building a great big sermon when the foundation has not been laid.  I’ve discovered it’s better to keep the message simple (but not simplistic), to take it a little slower and to establish a good, firm foundation. Then I can build my case.

I’ll never forget when I was asked to speak to an audience who didn’t have a lot of biblical knowledge. I decided to start simple. “I will be referring to passages in the Bible according to numbers,” I told them. “For example: ‘John 3:16.’ Now, the ‘3’ stands for the chapter, and the ‘16’ stands for the verse.” And Cynthia was sitting on the front row rolling her eyes like, “Oh, man, they’re going to think Chuck fell off a turnip truck!”

But would you believe it? I had a guy come up to me afterwards and say, “All my life I’ve been wondering what those numbers are, and what that colon in the middle was for. Now I know! That’s a chapter! And that’s a verse!” No kidding.

Most people will never see the inside of a seminary. (That’s why they have hope!) They don’t know a lot of the things we think they know. And unless we keep it simple, we lose them . . . and they never will.

I received an e-mail not long ago from a friend whose teenage daughter had taken notes during my sermon and then had written my application points on her bathroom mirror. (My friend sent me the picture.) 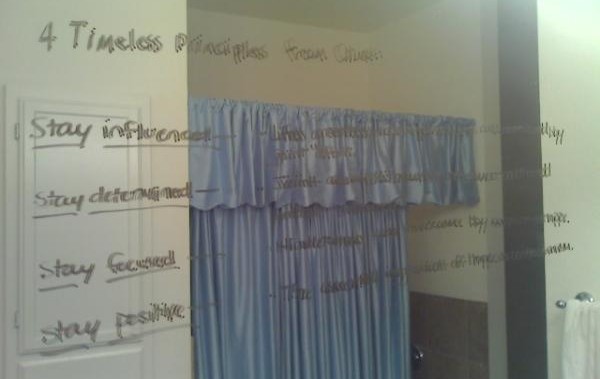 I’ve said for many years that if I can communicate in a way that teenagers get it, write it down, remember it, and then apply it—I will have accomplished something very gratifying.

Keep your stuff simple. The goal is to communicate, remember—not to impress.