My love affair with Thanksgiving takes me all the way back to my boyhood days. I had just turned 10 years of age and was in fifth grade at Southmayd Elementary School in East Houston. 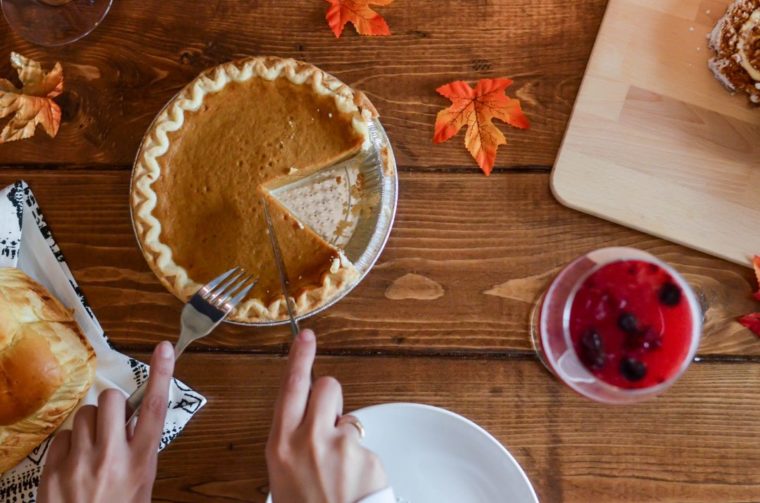 As I recall, I was still going barefoot to school—and I combed my hair, maybe three times a week. Girls didn’t matter a lot to me when I was 10! It was on a Wednesday, the day before our Thanksgiving holidays began.

The year was 1944. Our nation was at war across the Atlantic into Europe as well as in the Pacific and far beyond.

Times were simple back then but they were also rugged. Everything was rationed. Framed stars hung proudly in neighborhood windows—and sometimes they were quietly changed to crosses.

Everyone I knew was patriotic to the core. Without television, we relied on “newsreels” that were shown at the movies, bold newspaper headlines, and LIFE magazine, which carried photos and moving stories of courage in battle and deaths at sea. Signs were posted inside most stores and on street corners, all of them with the same four words:

Draped high across the front of our classroom was a huge American flag with its 48 stars and 13 stripes. We began that Wednesday as we did every other day in school, standing erect beside our desks, repeating the Pledge of Allegiance and then bowing our heads as our teacher led us in prayer.

Hanging just below the flag was a large picture of our 32nd president, Franklin Delano Roosevelt. She always remembered to pray for him—and our “soldier boys” who were serving their country in dark, dreary, and dangerous places a half a world away from my fifth-grade class.

My teacher had lost her husband on the blood-washed shores of Normandy the previous June. After we had saluted the flag, a hush fell across the room as we bowed our heads together.

No one moved. As she began to pray and give thanks, her voice broke and she started to weep. I did too. So did Richard Webb, my best buddy. And Wanda Ragland. Even Charles White and Warren Cook, two tough kids who later played high school football when we were all Milby Buffaloes, wiped back their tears.

No one moved as she stumbled and sobbed her way through her prayer, which was filled with some of the most moving expressions of gratitude and praise that I have ever heard emerge from a soul plunged in personal grief and pain.

In that epochal moment, time stood still. And I believe it was then—right then—that I fell in love with Thanksgiving. It became, for me, far more than just another holiday; it took on a significance that bordered the sacred.

Lost in sympathy and a 10-year-old-boy’s pity for his teacher, I walked home much slower that autumn afternoon. Although only a child, I entertained deep and profound feelings of gratitude for my country, kept free by the bravery and blood of men and women only a few years older than I, most of them fresh out of high school.

On that cool afternoon I felt a renewed surge of thankfulness for my mom and dad, my older brother and sister . . . my maternal grandparents . . . my friends . . . for my school . . . my neighborhood . . . my church. Though only a child, I promised God that I would fight to the end to keep this land free from enemies who would take away our liberty and erase America’s distinctives and steal the joys of living in this good land.

I have never forgotten that childhood promise. I remembered it at another Thanksgiving, fourteen years later in late November of 1958, when I wore the uniform and silently walked the same beaches of Okinawa where my fellow Marines had sacrificed their lives in the last great battle of the South Pacific in WWII. And as Thanksgiving returns annually, I still pause; I still let the wonder in.

Thanksgiving puts steel in our nerves and causes fresh blood to course through our patriotic veins. It reminds us of our great heritage. It carries us back with humbling nostalgia to those first dreadful winters at places like Plymouth and Jamestown, where less than half of those who first landed survived. But what grand men and women those pioneers became—those who pressed on.

Reading their names today is like reading a page out of our national heroes’ Hall of Fame. In words taken from Hebrews 11:38, they were “too good for this world.” At this time every year I pause and remember how thankful I am for each one of them. They had the stuff of which greatness is made.

Its historic halls echo with voices embedded in the woodwork—the voices of Washington, Franklin, Adams, Jefferson, Henry, Lincoln, Jackson, Eisenhower, MacArthur, and Reagan—all of whom challenge us to trim off the fat of indolence, passivity, and compromise, to rid ourselves of the stigma of strife and prejudice, the malignancy of selfishness and greed.

As everyone around us reaches for more and clings to what is, Thanksgiving drops to its knees, pleading that we release ourselves to others in greater need and set our affections on things unseen.

Pause and Give Thanks

As the very real threat of terrorism continues to rear its ugly head and as our culture gives way to shameful and brutal acts of violence, it is easy to let ourselves become preoccupied with only the fear of a stark and barren future . . . a world without color and laughter. Thanksgiving stands tall and shouts the same message every year:

There is a better way to think and to live! Your God is still blessing you with the fragrance of forgiveness and the beauty of His bounty.

I have found in the many years that have followed my experience in that fifth-grade class that it is essential to pause very deliberately each Thanksgiving and do what the name of the holiday tells me to do. When I do, without exception, I’ve found that beauty replaces the fear of barrenness and a deep joy returns to my soul.

Though she wrote her song long ago, perhaps on a Thanksgiving Day when times were hard and nights seemed long, Katharine Lee Bates was determined to see beyond the present and focus her mind on things beautiful. She provided us with a vivid reminder of why it’s worth it to make this a time to pause and give thanks:

O beautiful for spacious skies,
For amber waves of grain,
For purple mountain majesties
Above the fruited plain!

O beautiful for heroes proved
In liberating strife,
Who more than self their country loved
And mercy more than life!

America! America!
God shed His grace on thee,
And crown thy good with brotherhood
From sea to shining sea![ref]Katharine Lee Bates, “America, the Beautiful,” The Celebration Hymnal: Songs and Hymns for Worship (Nashville: Word Music/Integrity Music, 1997), no. 799.[/ref]

And so, as the-best-of-all-the-holidays fast approaches, may we take our cues from my fifth-grade teacher. May we be as self-forgetful as she was that lonely day in her life, soon to face her first Thanksgiving alone in her little apartment.

May we remember what she remembered—that Thanksgiving transcends our present trials, that it is a day of magnificent memories, a day of renewed commitment to the things that matter.

Like my teacher, may we not allow it to be eclipsed behind the clouds of our national aches or submerged beneath the pain of personal loss and hardship.

May Thanksgiving arrive this year with a forceful and throbbing impact upon us. May it leave each one of us gripped with gratitude for the same things that I remembered as a barefoot kid walking home from school on that autumn afternoon so many years ago.